I don't know how accurate this is but here is a sort of progress report for HANO's plan to "replace" the affordable housing units lost in the public housing demolitions. Of course given the decade of displaced families, scattered communities and other hardships amid skyrocketing housing cost, there's a lot that gets left out in that equation.


HANO has in recent years worked with private partners to build what are known as "mixed-income" developments — developments that include both subsidized and market-rate apartments — as replacements for its former housing complexes, which had become centers for poverty and often crime. The effort is aimed at alleviating the ills associated with concentrated poverty and giving low-income residents more modern homes to call their own.

Iberville became Bienville Basin in an on-site redevelopment that has been handled by HRI, another local developer. McCormack Baron, the firm behind Harmony Oaks and Marrero Commons, is handling the off-site component of the vast Iberville replacement project and has been working to pepper low-income units throughout the surrounding Treme neighborhood.

Of the 821 former Iberville units, HANO and its partners have fully replaced 579, have another 102 under construction and have yet to break ground on 50, officials said. That will leave 90 still to go.

This particular story says we're supposed to see 30 more added to that total via a planned redevelopment of the abandoned St. Louis Street Winn Dixie. The scheme here, as usual, is to accomplish this by handing out a package of tax credits, grant subsidies, and a 25 year PILOT agreement to the developer who will also get to build another 46 apartments for sale at "market rate."

Anyway, since HANO is apparently keeping track of the number of units it has "replaced" since blowing up the Big Four, I'm curious to know if there exists a full accounting of how much all of this has cost in terms of tax credits and other incentives paid out to developers.  For extra credit you can factor in their profit from the luxury rate housing they've built on the prime real estate they've been granted in the process.

If we're agreed with the Advocate here that, "alleviating the ills associated with concentrated poverty," and not just handing sums of cash to wealthy developers is really the goal of this project, we should also look at whether or not the costs justify the supposed benefits of that.

How is that whole de-concnetrating poverty thing going, by the way? Well, according to the Center for Budget and Policy Priorities..

Just 14 percent of all metropolitan voucher-assisted families with children — 123,000 households — live in low-poverty neighborhoods. The share varies considerably by location, ranging from 4 percent in the New Orleans metro area to 45 percent in the Washington, D.C. metro area (see Figure 1).

Not great, then. Not really de-concentrating poverty. From the looks of things, we are re-concentrating it on lower ground and further away from the city center. Here it is on the map. Click to embiggen. 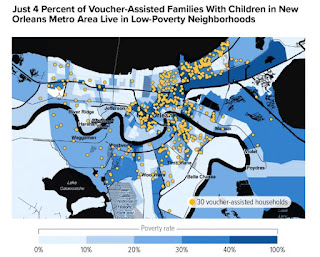