The Year Of Enforcement 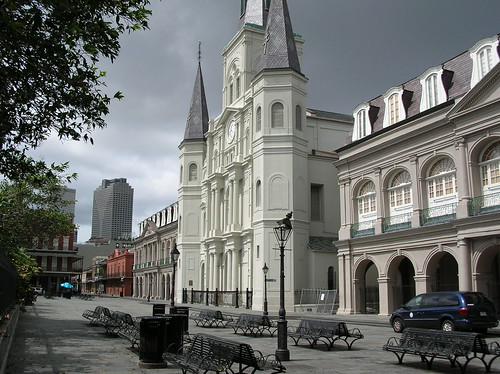 Jackson Square in 2008. The dividing "armrests" on the benches are innovations introduced by former Councilwoman Jackie Clarkson. They are intended to prevent homeless people from sleeping there. Somehow they manage anyway.

This quote is from Councilmember Cantrell speaking at Monday's Year End municipal press conference hosted by the Mayor and every other public official who wanted to speechify for no particular reason.


I used to think Stacy Head was the new Jackie Clarkson but that's probably an out of date assessment considering how far to the right the entirety of city government has moved in recent years.  Stacy is now Peggy Wilson.  Latoya is the new Jackie.

If 2015 is going to be The Year Of Enforcement, Cantrell has already gotten a head start on that in 2014. This year she worked hard at shooing homeless people off of the streets under the Calliope overpass and shooing some of the fun off of the streets during Carnival.

She also, sort of mysteriously, allowed the demolition of one property under strange circumstances having to do with a faulty enforcement mechanism. Not sure whatever came of that. But the message at the time was, if you've got the money, we'll let you do whatever you want.

Anyway, the fact that she mentions "short term rentals" is interesting.  Most likely what she means is that they're going to be made more widely legal, though.

She doesn't mention the noise ordinance.  But I guess, since we're already putting bar employees in jail over it, 2015 can't really get much more enforcey than that.


Note: Yes, everyone involved in that Jax noise enforcement story seems pretty terrible for one reason or another.  But it's the jail for noise violations bit that really stands out.  Especially given the location. Tonight there will be a party there which will probably garner some attention.  I hope it doesn't get too loud..
Posted by jeffrey at 12/31/2014
Email ThisBlogThis!Share to TwitterShare to FacebookShare to Pinterest
Labels: Carnival, homelessness, Latoya Cantrell, New Orleans, noise ordinance, politics