Here's a colorful description of the once again "swelling" (according to the headline) homeless encampment under the highway on Calliope Street. We're pretty well used to this phenomenon and have come to expect it the way we expect the river to rise during the spring.  (So the headline makes sense.)

The article tells the whole farce well.  There are the obligatory quotes from nearby residents about how unsafe they feel. There's a line from a realtor about how it's bad for tourism.  There's a mention of the "sweeps" the city does to hide the problem when a particularly big tourist event is in town.   And there are the various other unconstitutional ideas proposed by city government to sweep it away more permanently.


Tyler Gamble, the mayor’s current spokesman, said in a statement Thursday that the city is “preparing bids to repurpose and manage the area, including potentially fencing the area.”

He said the city sends a mechanical flusher to clean the camp every week.

I'm not sure what a "mechanical flusher" is.  Best guess is it's one of these street sweeping machines that follows Carnival parades in the Krewe of Municipal Vehicles. 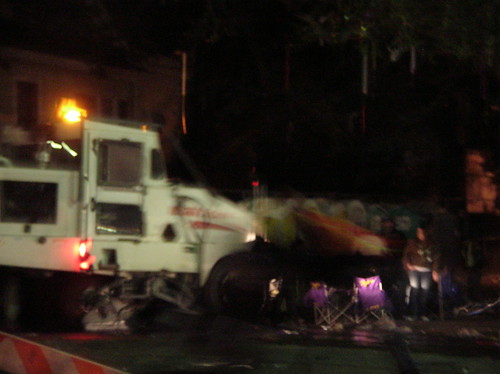 Multiple other horrors occur. Latoya Cantrell wants to make it illegal to give people food, for example. The only thing missing from this story is a comment from the now sadly retired Jackie Clarkson.  I would have laid money on her being the person most likely to mention homeless spikes as a solution.

Meanwhile, there are actual real difficulties there that no one seems to know how to deal with.

However, neighbors and homeless advocacy groups say the area has become a plague and an eyesore, a rodent-infested and lawless sector in the middle of the city’s downtown where police presence is rare and drug use and violence are rampant.

“The tents attract drug dealers, who move in under cover of the tents, preying on the vulnerable homeless population, many of whom have co-occurring mental illness and substance use disorders,” (UNITY Executive Director Martha) Kegel said. “Women get raped in the tents, vulnerable people have their disability checks stolen, and violence has become common.”

City officials acknowledge the area presents a significant threat to health and safety but say they are hamstrung by budget constraints, constitutional protections and the complexities of dealing with a diverse population with a host of substance abuse and mental health issues.

Oh well. One supposes that had NOLA.com run this story there'd be some mention of a young "entrepreneur" with an idea of what to do here.  But failing that, we'll have to settle for the "faith-based" approach. It's very life-affirming.


On Thursday, a church group from Jacksonville, Florida, pulled up with 30 to 40 teenagers in tow and handed out food and water.

Corey Markles, a 25-year-old youth pastor from Crossroads Church, said the group was trying to provide not only food but also entertainment.

They staged a talent show, where members sang karaoke.

One girl serenaded the encampment with the lyrics, “You’re amazing, just the way you are,” from a song by Bruno Mars. Others did back handsprings and cartwheels next to a pile of empty plastic flasks and a man lying on the ground in his underwear.


Give a man a skateboard, he'll sleep under the overpass. But teach a man to skate and..  oh who knows?