I spent a little time on the bicycle this afternoon chasing the All Star Second Line Parade through parts of Treme and Downtown. After cruising the neighborhood and people watching for a while, I planted myself under the Claiborne overpass at Esplanade Avenue where I got a few pictures. For the first half of the 20th century, the Claiborne Avenue neutral ground between roughly Canal Street and Elysian Fields was a wide parkway shaded by a quadruple row of oak trees. The green space was a central staging area for Downtown Carnival events. It was the stomping ground of Indians, Bone Gangs, and Baby Dolls. It was the heart of the downtown black community. In the mid sixties, the heart was ripped out of this neighborhood when the downtown stretch of Claiborne Avenue was overlain with the elevated portion of Interstate 10. Today the trees are gone but there are still mementos of the culture that flourished on this strip. In fact, while the neighborhood has suffered, it has clung tightly to its traditions. Many of the cement columns which support the overpass have been decorated with murals depicting aspects of local culture and even the long lost oaks themselves. 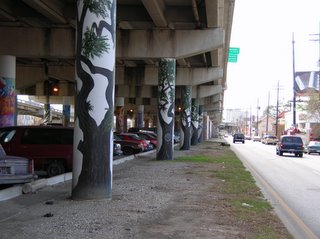 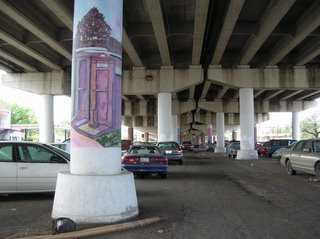 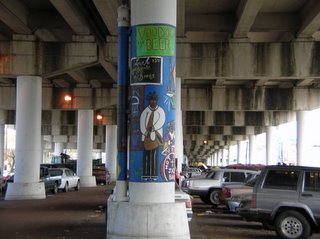 These murals depict a defiance of sorts; a triumph of the soul over the most vicious ravages of "progress". This kind of defiance is called for once again as New Orleans struggles to right itself after the storm. The sight of the murals next to the many abandoned and flooded vehicles the city is currently depositing under the overpass brings this challenge into sharper focus. 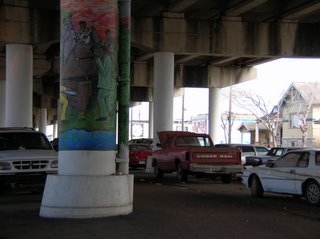 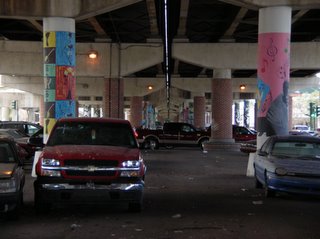 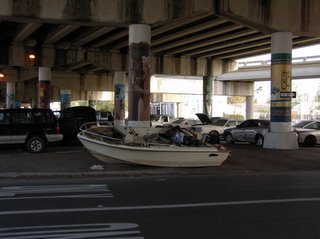 Despite the altered setting, something very like the classic Black Carnival still does occur "under the bridge".. or at least did until Katrina. God knows what will happen in 2006. Today's event was partly about reclaiming that heritage come hell, high water, or Republicans. 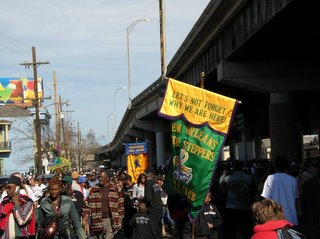 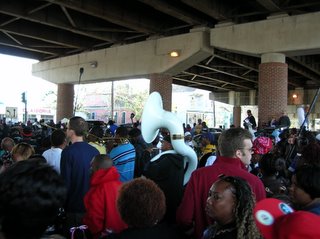 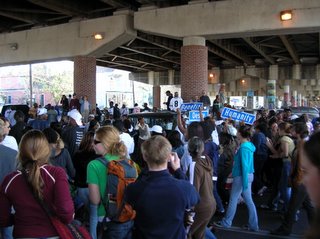 Posted by jeffrey at 1/15/2006
Email ThisBlogThis!Share to TwitterShare to FacebookShare to Pinterest