Why we're going to lose on short term rentals 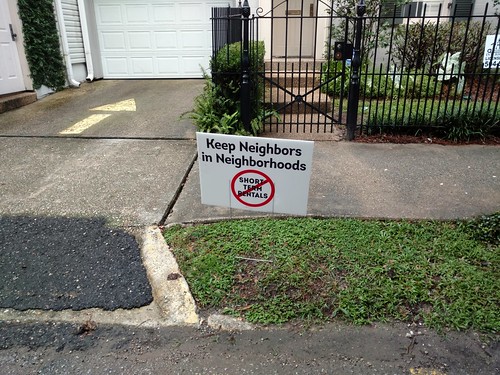 After months.. no.. actually.. years and years of watching this play out on a national and worldwide scale, I can tell you right now that we're inevitably going to lose the fight over short term rentals and affordable housing in New Orleans.

Why? Because, first and foremost, although much has been written, only a very small segment of the population has done much reading on the subject.  This means that every single time the issue comes up, we begin again as though there is zero context available.  This is how I can wake up on a morning like today and see professional reporters tweeting plumb-ignorant bullshit like this.


"Fighting the future" Goddammit, we've been through this so many times, I'm exhausted.  I'm not even going to link the many many articles written about how "the future" in other world tourist destinations is now about reclaiming the city from the plague.  Just fucking google it. You can even scroll back through my stupid blog if you want.  I'm just an idiot who reads the news. If I know this stuff by now, y'all should fucking know it by now. But every day it seems we start from scratch.  I'm tired of it.

But that's politics. Ninety percent of the time it's about elites profiting from our ignorance and/or failure to organize.  In New Orleans, especially, the default conventional wisdom is that poor people kind of deserve to be evicted anyway.  It's only in recent years, though, that this notion been able to ride the national wave of a gentrification-friendly zeitgeist. Poverty, "blight," crime, the typical social and economic ills of the city no longer need to be addressed directly by our civic leaders. It's much easier, instead, to just move them out of the way where hopefully the tourists won't see. And now that we can turn every neighborhood worth visiting into a tourist-only zone, the chances are all they'll ever see is each other.

And so for the final phase, here comes a heaping pile of corporate ad money.


Airbnb is trying to burnish its image in the run-up to an expected October vote by the New Orleans City Council on short-term rentals with a series of ads featuring homeowners who take advantage of the service.

In the ads, residents who list their properties with the service talk about how the extra money brought in by renting out rooms in their homes has helped them make ends meet.

I know this isn't the primary concern in the local debate. But at some point we are going to have to talk about how damaging it is to celebrate the fact that people have to rent out rooms in their homes "to make ends meet." The fundamental problem is still that housing is not affordable.  Incomes aren't covering the costs of basic needs. And so people (some people.. those who have the capacity and flexibility of lifestyle to allow it) are forced to "side-hustle" up the difference. This isn't a triumph of entrepreneurship and "personal responsibility." It is a market failure and one that companies like Airbnb exacerbate rather than solve.

Anyway, like I said, that's not even the center of the public controversy right now.  The fate of so-called "whole home rentals" is.  And guess what about that.


(The ads) do not touch on the most controversial aspect of the debate over short-term rentals in the city: renting of entire homes in residential neighborhoods throughout most or all of the year, not just for a few weeks a year or else renting of a few rooms in otherwise occupied homes.

Not that it matters. All that matters is that Airbnb has dropped a truckload of money onto the perpetual blank slate of context-free "debate." They have gone and bought themselves a valid position in the political arena. And so all that's left now is for our everyone to agree that "there has to be compromise."  Our wise councilpersons will figure that out for us, I'm sure.
jeffrey at 9/15/2016
Share