Things that won't be finished before the Super Bowl

We were in Bywater this evening to check out the "Robot Parade" put on as part of the Automata NOLA kinetic sculpture exhibit at the Ironworks Warehouse.  As it turned out there wasn't a whole lot of parade to the Robot Parade. Not a lot of robots either.  We saw exactly two robots pass us in the procession.  Of those two, only one was able to make much progress without frequent encouragement from its operator's foot.

The exhibits were pretty cool, though. And the outing gave us a chance to finally try Maurepas Foods where I am happy to recommend three of the six dishes we tried there.  This is becoming a familiar experience for us with "small plates" restaurants.  The format encourages us to order a whole bunch of stuff which is nice because it feels like we're getting a broad sampling of the menu.  But often, as was the case here, we end up with more food than we really needed. And no matter how much we enjoy the good dishes in that mix, the ones we don't care for as much, end up hurting the overall experience... not to mention unnecessarily over-inflating the bill.

It's frustrating because it leads us to think less about how good the bright spots were and more about how much better the meal would have been if we had ordered only those things.  The good thing is we know exactly what we would and wouldn't order if we end up going back.  And what's good here is worth going back for.  I just feel like I paid a heavy price figuring that out.

Before dinner we climbed the flood gate at Piety Street to sneak a peek at the Downriver park portion of the "Reinventing the Crescent" project. There had been some expectation that the park would open before the end of the year, or perhaps by the Superbowl deadline everything else in town is supposed to be spit-shined in time for. From the looks of things, they're probably going to miss that. 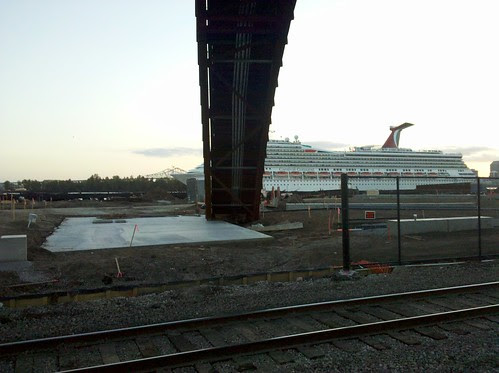 Posted by jeffrey at 12/03/2012
Email ThisBlogThis!Share to TwitterShare to FacebookShare to Pinterest
Labels: food, New Orleans, Reinventing the Crescent, robots

The city's "100 projects" database indicates that it's short about $4 million in funding right now. It's funded at $30M, which I believe was the original estimated cost, but the current estimate is $34M. Makes sense because I very rarely see anybody over there working.

My far more long-winded write-up/defense of the Robot Parade, with a shout-out to yer blog... http://julesbentley.com/a-defense-of-the-robot-parade/