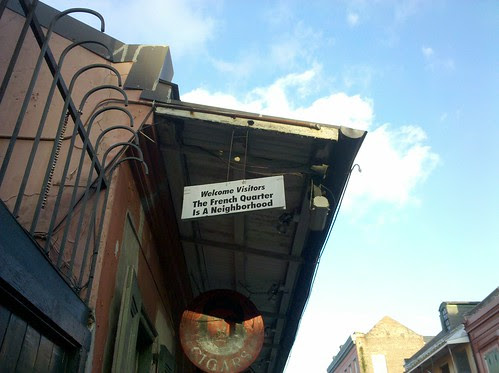 It's kind of been a long slow boil but it's maybe time to admit that the French Quarter as a "neighborhood"  is a cooked frog by now.


In addition to bringing in more local artists, Smith also suggested in a previous interview that he wants to bring back fresh produce and seafood to the French Market, saying, "The French Quarter at its core is a neighborhood where people live and work and eat so let's make a market that the residents can use."
Diekelman wasn't crazy about that idea either.

"Tourists do not buy groceries (and) there are very few actual residents in the French Quarter anymore," she said. "The locals will not pay the prices that must be charged to sustain the rent, which is the highest rent in the entire French Quarter per square foot. We could possibly sustain a weekly Farmer's Market, but the idea of turning the entire front shed back into produce is also destined to fail."

There were 3,813 residents in the French Quarter as of 2010, down from 4,176 in 2000, according to the Greater New Orleans Community Data Center, though it is not clear how many of them are full-time residents.

It didn't have to be like this.  But a long time ago we decided that the best way to encourage people to visit New Orleans was to move New Orleanians out of the parts of town they will visit.  And so now those parts of town are really for and by the tourists.  Oddly we continue to sell our visitors on "our unique culture" whatever that might be. When they come and stay in the Quarter, though, the "culture" they experience is pretty much all their own.

But I don't really care about the "culture" wars. Everyone has their own idea about what that means and I think it's largely a distraction.  The brochures still talk up "the culture" quite a bit.  Maybe they're just selling vacationland to vacationers.

I do care that they tend to push the people who were living where they want to play out of their way.  And that the people elected to represent me seem to be on their side.  Especially since the process doesn't end once the tourists and, now, the big money part-timers have taken over the Quarter.


Later that evening, at Booty’s Street Food, Solange Knowles, who splits her time between Brooklyn and New Orleans, turns up for empanadas, her son, Julez, in tow. “There’s an unexplainable magic here which I don’t bother trying to intellectualize,” she explains.

Part of the allure, of course, is that even post-Katrina, New Orleans looks like a movie set. The relentless strip malling of the rest of the country has largely left the Big Easy alone, and the city retains its intoxicating charm. One-off boutiques line Magazine Street, where, unbelievably, there is but a single Starbucks. Many houses still feature working gaslights from the family-owned Bevelo Gas and Electric Lights, and you can always find a bar stool at any hour of the day or night. For transplants and locals both, the city still feels ripe for discovery — something that’s increasingly hard to say about New York.

I'm not so sure I'm interested in having my home "discovered" by these adventurers.  That never seems to work out so well for the natives.

Unfortunately, the language we've developed for discussing these apprehensions makes it difficult for people in my position, i.e. urban dwelling people of modest means, to resist gentrification without being labeled "xenophobic" or god forbid, "hipster haters." But this isn't really about fashion or the identity politics of who is and isn't "from here." Such constructs obscure the economic fault lines at work.


In an insidious way, the narrative of "urban renaissance" – the tale of heroic elites redeeming a city that had been lost to the dangerous classes – permeates a lot of contemporary thinking about cities, despite being a condescending and often racist fantasy.

When gentrification is criticized these days, it tends to be done in terms that muddle the issues. The least useful way to criticize gentrification is to obsess about an area's character, coolness, or even worse, "grit". Lamenting the proliferation of cupcakes and cappuccino is a staple of reporting on places like Williamsburg or Dalston. But this kind of story reduces something that's all about inequality to middle-class agonizing over authenticity.

This is precisely the problem one runs up against when discussing gentrification. The conversation devolves into pointless drivel about pop cultural trends and who does or doesn't accept them.  But despite the rampant conspiracy theories, nobody is trying to take away anyone's craft cocktails and food trucks.  This is New Orleans. We like fun in all its forms.  But the health of a city is not defined only in terms of which fashionable entertainments might be purchased there.

More importantly, this isn't a dispute between natives and non-natives.  The policies that encourage our boutique city development strategy aren't set by the rich and famous interlopers who take the brunt of the criticism for it.  That is done by our own local elected and non-elected civic leadership.  When Solange Knowles or some yuppie NYT travel writer "discovers" your home and claims it in the name of Brooklyn, it was Jackie Clarkson and Mitch Landrieu and Pres Kabacoff who gave her the map.

Our angst, then, is the consequence of our own leadership abandoning a municipal policy that supports the entire community in favor of a "trickle-down" approach that caters to the wealthy first and  leaves the rest of us to scramble over to wherever we're the least inconvenient.

Lucky for me I live in a relatively shitty building.  But it's just about the last shitty building on the block in a pretty "culturally interesting" neighborhood.  What happens when that gets "discovered" too?


Take Uptown and the Garden District, for example. According to Latter & Blum research, the number of single-family homes or condos available plummeted more than 20 percent, compared to the same three-month period (July-September) last year. Meanwhile, the average purchase price last month was $401,000. That's up from $360,000 in September of 2012.

"As the fear of rising interest rates kind of played itself out in the market, people who were sitting on the sidelines finally said, ‘Okay, I'm gonna pull the trigger. I'll make my decision and I'll buy,'" Miestchovich said. "They may have already targeted one or more units to buy and that's why you've had people bidding against each other for the same units."

Miestchovich also said - simply put – New Orleans is a hot city these days, and many out-of-towners are snapping up properties.

"You've got lots of people that buy because they want to have a piece of New Orleans, so to speak, and because they spend time here," he said.

Sooner or later I'll be in the market for an equally shitty building in a far shittier neighborhood.  But, hey, the city will be "revitalized" which is apparently all that matters.
Posted by jeffrey at 10/11/2013
Email ThisBlogThis!Share to TwitterShare to FacebookShare to Pinterest
Labels: French Market, french quarter, gentrification, New Orleans, tourism

I read the article about the French Market earlier today. Sadly, its full of crap - cheaply made trinkets, sunglasses, candles and little to no locally made items. The people I often see roaming through it, do not appear to be tourists - unless you describe Kennerites and Chalmetians as tourists. That's the irony in all of this - those opposing change claim the tourists won't support local made items and a farmers market. Yet, its our own suburbanites who are buying the cheap made crap now available throughout the place.

Having grown up in Georgia's version of Vacationland, I say again and again there are plenty of ways to mitigate this that never, ever get past the surface conversation of "gentrification" and "hipter hating." The first and foremost policy issue is and will always be property taxes. How in the world is NOLA selling properties at these values and still running a shoestring budget with less than standardized services? Because property taxes are currently set in this city in a way that rewards both speculation on blighted or underutilized property and ownership of second, vacation homes. The city cuts huge tax breaks to out of town business that move here. Meanwhile, a lot of homeowners are getting clobbered on property taxes, which means that only folks with deep pockets have enough start up capital to own homes, and if they own more than one home, they have to charge a whole lot in rent. Unravel that monster and rearrange the priorities and incentives, and a whole lot of these gentrification issues become much more manageable.

Two uptown realtors have told me that sometimes, before local buyers can even secure financing, a non-local will come in and pay cash for a house. My husband used to wave to people he grew up with on the street, but we rarely see them anymore. I think they all sold out, and I don't blame them because I'm nearly there. The day you feel like you're not dressed hip enough to run over to Walgreens is the day it's time to move.