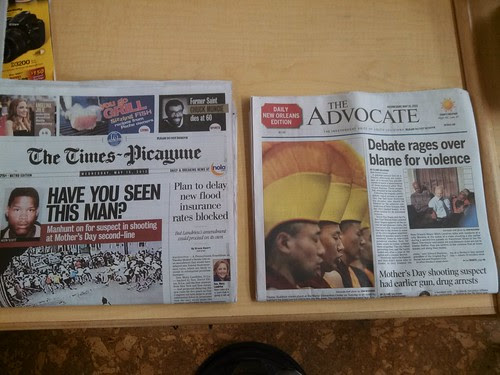 Grace, who declined a job offer from The TImes-Picayune last year following the paper's restructuring, will return to print three times weekly with a column that will appear Tuesdays, Fridays and Sundays. (Most recently, she has written a series of cover stories as a contributor to Gambit.) Last week, James Gill, another veteran T-P columnist, jumped to The Advocate, where his column appears twice weekly.

"I'm back to doing what I always did — writing about local and state politics — and really excited to be part of the conversation in Baton Rouge," Grace told Gambit this morning. "I'm picking up where I left off, and surrounded by some of my favorite people who happen to be great journalists."

It's hard to deny that the New Orleans newspaper war is a compelling story. But it's important to note that so far it's basically a story about one paper being brought back from the dead.. much of it anyway.

From an overall employment standpoint, it's still a negative. A lot of people lost their jobs when Newhouse decided to gut the T-P.  Aside from the high-profile hires The Advocate is poaching, most of those jobs aren't coming back. And, of course, the overall quantity of reportage on public affairs in New Orleans is about the same or somewhat reduced. And even that is likely reaching only a fraction of its former audience.

Still, it's good to see these people back in print on a regular basis.  And if Stephanie Grace's fact-based but generally conventional wisdom driven columns about local politics are indicative of some nefarious "left wing bias" at The Advocate, well I guess we'll just have to live with that.

Speaking of John Georges and "left wing bias" here is some terrific nostalgia for you.

In case anyone is reading who needs context on that last link, it's not really Geroges displaying anything other than rank cynicism. He was speaking to the Orleans Parish Democratic Executive Committee in a clumsy attempt to win a mayoral endorsement. Of course everyone in the room understood Georges was insincerely pandering (condescending, really) to the audience and so nobody took anything he said seriously. Also, a less ridiculously goofy delivery probably wouldn't have hurt matters.

There once was a time when politicians could get away with radically altering their rhetoric and  positions according to whatever audience they were trying to sucker. But this episode clearly demonstrated just how different circumstances have become.  Because modern media allows us to see more of the picture, pols who alter themselves this radically from one speaking engagement to the next are seen as the hypocrites they are. (Of course, all politicians are dirty ugly hypocrites but few of them are this blatant about it anymore.)

The fact that he was embarrassed by his own words in this recording prompted Georges, at a later stage in the campaign, to bemoan the existence of "dangerous people on the internet." And thus a meme was born. And now this champion of free speech owns a newspaper.  Neat.
Posted by jeffrey at 5/21/2013
Email ThisBlogThis!Share to TwitterShare to FacebookShare to Pinterest
Labels: Advocate, John Georges, media, New Orleans, politics